When the PBN update rolled through we had a ton of sites hit with Thin Content penalties, including one site that we had plans to funnel the traffic to build a genuine “real” business from.

On a whim just before Christmas, I decided to submit the site for reconsideration and it was approved, penalty revoked!

I’ll detail everything about the site below, minus the domain and sensitive information. The reason for withholding that information is because we are running some experiments to see how quickly (if at all) we can get the site back beyond it’s pre-penalty traffic. It seems that whenever someone does the right thing and reveals 100% of information, some absolute pelican (that’s Australian terminology for halfwit) decides to negative SEO it for fun.

So although being able to reveal the exact domain would be both interesting and beneficial for you at this point, I believe the recovery process will provide more benefit so for now, it’s not really the “No Hat Way” to withhold juicy details, but I’m going to on this occasion. Hope you understand!

Here’s the traffic to the site leading up to the update:

It was getting well over 10k visits per month even in the off-peak time in the niche and was worthwhile investing some time into in terms of monetizing it outside of Adsense (which was a poor way to monetize due to very low CPC).

Traffic fell off a cliff with the PBN update and resultant Thin Content penalty. You’ll see a little spike in traffic in October. That’s from Reddit and other social media activity we generated after the update.

Back to the story…. We pretty much decided to write off the money sites that got manual penalties. We figured our time is better invested in other projects than trying to recover sites that may never recover anyway.

However, we toyed with the idea of doing a site recovery case study where we’d aim to get 50% of traffic back via non-SEO tactics within 30 days of a penalty. A steep ask, but we started anyway using tactics like Brian Dean’s Skyscraper Technique. We only ever got part-way through it and abandoned the idea in favor of other priorities.

During our abandoned recovery case study, although we were not aiming to get the penalty revoked, we had done a lot to the site that I felt would warrant a revoke. The keys were:

The actual content on the site was solid pre the penalty. All written by Interns or North American/Australian writers and the bulk of it vetted by me as I’m familiar with the industry the site is in. The content was very factual and comprehensive but it was ultimately highly optimized and designed to get Adsense clicks as opposed to being super-helpful content. So in Google’s eyes, it was closer to Thin than comprehensive, plus it was in a Webmaster Tools account with a dozen other sites that got hit (those were of lesser quality).

Here’s a copy of my Reconsideration Request email, minus any sensitive information:

“Hi there, Since the thin content penalty was given, I’ve comprehensively updated this website in terms of the look and feel (new theme) and also additional 9 pieces of new content, including the examples below:

In fact, some of the review articles on the site were actually contributed to by the companies themselves. This one is an example > {URL of article where a company had provided most of the content} with {company name} having contributed to the detail within the article and I’ve updated it based on their feedback on numerous occasions.

There truly is no better online resource in Australia for factual information about {niche} so I trust that the above information is sufficient to have the thin content penalty revoked. Regards,”

That was sent on 18th December.

Here’s the response on 23rd December: 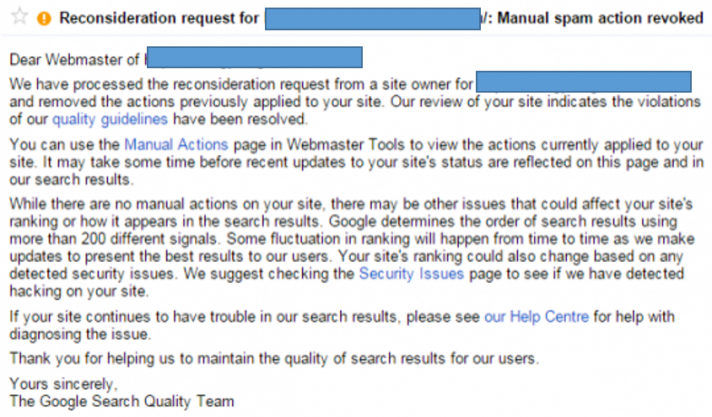 Here’s how it’s performed since the penalty was lifted:

The site is now back to over 250 visits per day. I expect that to climb as the keyword rankings are increasing consistently.

13 Key Points on this Reconsideration Request:

Here are my thoughts on why this reconsideration request was approved… At least some of the contributing factors. I can’t say from a sample group of one site that this is the definitive guide, but I will be doing more reconsideration requests for other sites to see if we can find some common remedies. Would be nice to know!

There are three components to this reconsideration request that I feel contributed to the positive result:

I’ll summarize them all below:

Now, the cynic in me says that Google staff would surely be aware of nichepursuits.com and aPennyShaved.com > they’d be crazy not to have staff following popular blogs and projects. So them approving the reconsideration request would essentially give thousands of gray hatters out there hope. Not a smart move for their campaign against PBNs. Maybe aPennyShaved.com was destined to be rejected right from the start?

Site B every day of the week. So give this consideration.

The site was basically totally over-hauled. It was turned from an average-looking site to a terrific looking site. Here’s a screenshot of the original site: 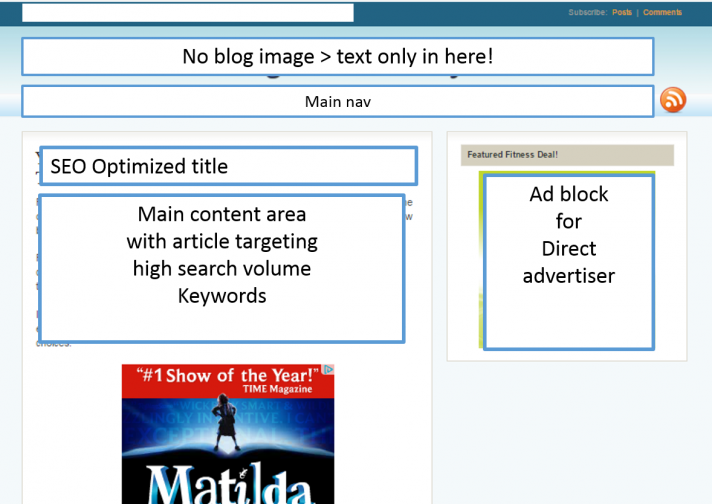 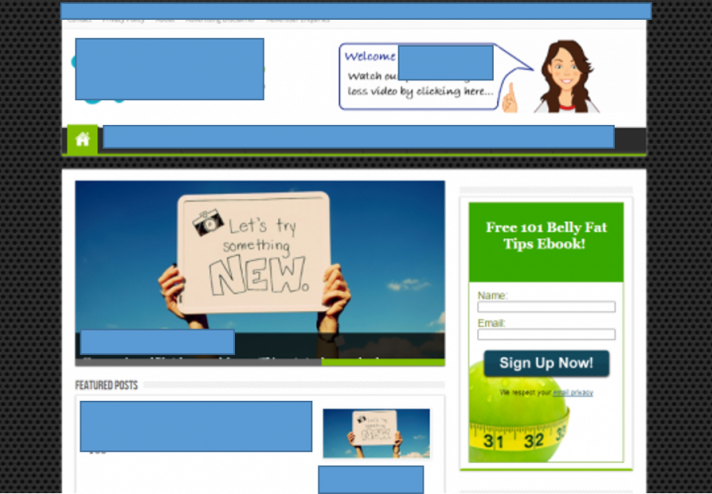 13. Made it easy for the reviewer:

All up, I’d say the total time to do this would have been around 15-20 hours. We had VAs do the bulk of it and outsourced the writing. But if you were to do it all yourself, 15-20 hours in this instance would have been about the mark. This factors time for everything from writing 9 new articles (depends how well you know the niche), updating the site’s theme, removing PBN links, writing the reconsideration request, building the FB community (including posting to the FB page regularly).

You could have VAs do most of it and get the time down to 5-10 hours of personal time easily. So from that perspective, worth the effort if you have a genuine site that has a penalty sitting over it.

Feel free to add comments if you have any experiences to share. If you’ve been successful in getting a penalty revoked, leave a few pointers on why you feel yours succeeded as that will help others with penalties hanging over their sites.

In our next two internship intakes I’ll be submitting a few more sites for review. You can be a part of the testing group by helping with the experiment and gain a first-hand insight into what works.

If you’re interested in being part of an upcoming intake, just register here and I’ll add you to the February and March applicant list!