I’ve been placing a heavy focus on alternative traffic sources (non-Google) through 2015 and one of the focal points has been Reddit.

You can literally find a sub-Reddit on just about anything and within each one there will likely be swarms of Reddit users that are REALLY into certain topics.

It’s a perfect destination to familiarize yourself with a niche, connect with existing enthusiasts within the niche and to siphon traffic and funnel it through to your sites.

We’ve also been using it as a way to get really high-quality content for free and of course, we’ve been using it to drive plenty of traffic to sites too.

Recently one of our money site partners, Amir, used Reddit to kick off a really cool article he had produced for a fairly narrow careers site that generated over 25,000 organic Facebook shares and over 60,000 visitors to his site within a week. And it’s a seemingly non-viral site, and narrow in that it only targets a certain type of career. More on this in a future post because how he did it was very smart indeed.

Clearly, posting to Reddit has many benefits, but in the last couple weeks I decided to take it up a notch and experiment with launching my own sub-Reddit.

The sub-Reddit currently has about 200 subscribers (not bad in less than 2 weeks IMO) and I’m testing out how/if launching a sub-Reddit can become a viable tactic for ongoing traffic.

We’ll be doing a second Sub-Reddit launch in our next SEO Internship and the aim from each is to learn a process for kicking these sub-Reddits off and growing them because if you can control an entire sub-Reddit, you’ve basically got traffic-on-demand to your sites which is mighty enticing.

When you control a sub-Reddit you can design it to suit, which means you get to name it what you like, you can moderate it how you like and you can also customize the sidebar of your sub-Reddit as you see fit.

Some sub-Reddits will link out to related sub-Reddits and I’d noticed that there will be occasional links to external websites in sub-Reddit sidebars as well.

Linking to external websites, particularly if YOU own them is great for exposure to people interested in your niche, and will obviously drive traffic. What I didn’t expect to find out is that the links from sub-Reddit sidebars are do follow.

Yep, a DA100 dofollow backlink thank you very much.

I’m never too fussed about chasing dofollow and nofollow links. As I mentioned in this article about how to jag links from wikipedia, a nofollow link from a high DA site is still worthwhile. Hard to argue against that.

And because of the nature and structure of Reddit, the links end up being linked to from all kinds of places on Reddit and also sites that scrape sub-Reddits.

Here’s how it works:

Anything posted to the main content area of Reddit is typically nofollow. Occasionally you’ll get a temporary dofollow link from someone’s profile if they drop a comment, but they don’t seem to stick after the activity is pushed down the feed.

The side-bar, which is 100% controllable when you moderate the sub-Reddit is yours to do what you like with. Here’s an example of a sub-Reddit with sidebar links (shown by the green box):

And here’s the source code… No nofollow attribute there. 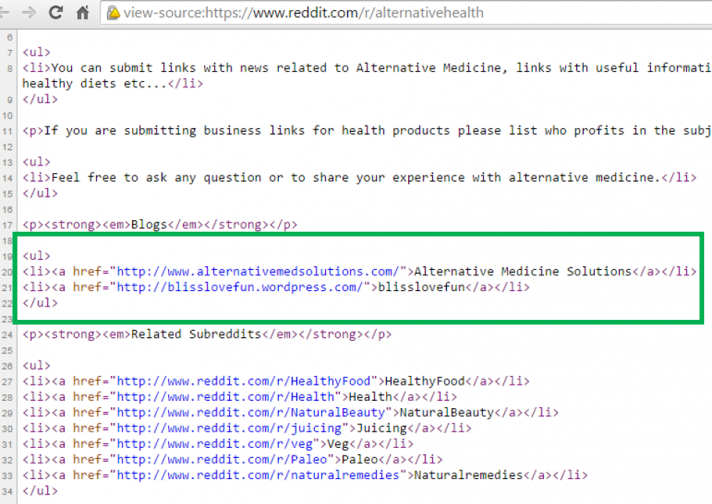 So, how do you start a sub-Reddit?

Well, that’s easy to do and the setup takes 5 minutes.

To be able to start a sub-Reddit you need to have a certain level of comment and link karma and a certain profile age (4-8 weeks-ish I am guessing). I’m kicking myself because I made a note that I can’t find right now (will update once I do) of precisely the tipping point required because one moment I couldn’t start a sub-Reddit and then literally with an extra bit of link karma I was able to.

So I pretty much have record (somewhere) of the exact numbers required.

It’s about 30 comment karma and 60 link karma. Not that high anyway. Just a few decent submissions and you’re all set.

I’ll follow up with progress on launching sub-Reddits in future posts, so stay tuned!

In the meantime, go get yourself an easy DA100 link from Reddit!