With the meteoric rise in the number of ICOs and the amounts they raise, there’re bound to be winners and losers. Here are 2 famous ICO examples:

Ever since then, Ethereum has quickly grown and successfully became the second-most valuable cryptocurrency ecosystem in the world today.

On paper, the DAO had a lot of promise, it gave investors voting rights on proposals, thus creating decentralized, autonomous organizations.

The team raised $152m in total during the ICO. But the platform’s code was buggy and it was attacked multiple times, resulting in the loss of several millions worth of funds.

In the end, the whole project was put on hold, and existing DAO tokens were converted back to Ethereum.

It’s a valuable lesson of how successful funding is only one aspect of running a business.

What’s the difference between these two examples? How do you turn your ICO into a success and avoid becoming a failed statistic?

What Is an ICO & How Does It Work?

Initial Coin Offers (ICOs) is like the love child of crowdfunding and IPOs. It allows startups to gain direct access to a pool of investors via cryptocurrencies.

Much like an IPO, startups raise funds through cryptocurrencies and investors in turn are given ownership to a pre-agreed amount of tokens or cryptocoins which functions like shares.

There’re usually 2 stages in an ICO:

Soon after an ICO is finished, the goal (and expectation) is generally to get the token listed on as many big cryptocurrency exchanges as possible.

Note: Getting listed on exchanges can happen even before the tokens become usable for their stated intent.

Being listed provides the secondary market where early contributors to the ICO can then sell, buy more or exchange their tokens.

If a token becomes more popular (more and more people want to buy it) in the time between the ICO and being listed on exchanges, its price rises.

The post-ICO phase is all about delivering value for customers and token holders via continued development of the product and following the product roadmap.

Compared to an IPO and its strict regulations, it’s much easier to raise money via an ICO, which is currently unregulated.

So you see many startups jumping on the ICO bandwagon in order to capitalize on the opportunity.

This is going to turn arrogant venture capitalists on their heads,” – Michael Jackson, a partner at Mangrove Capital Partners. 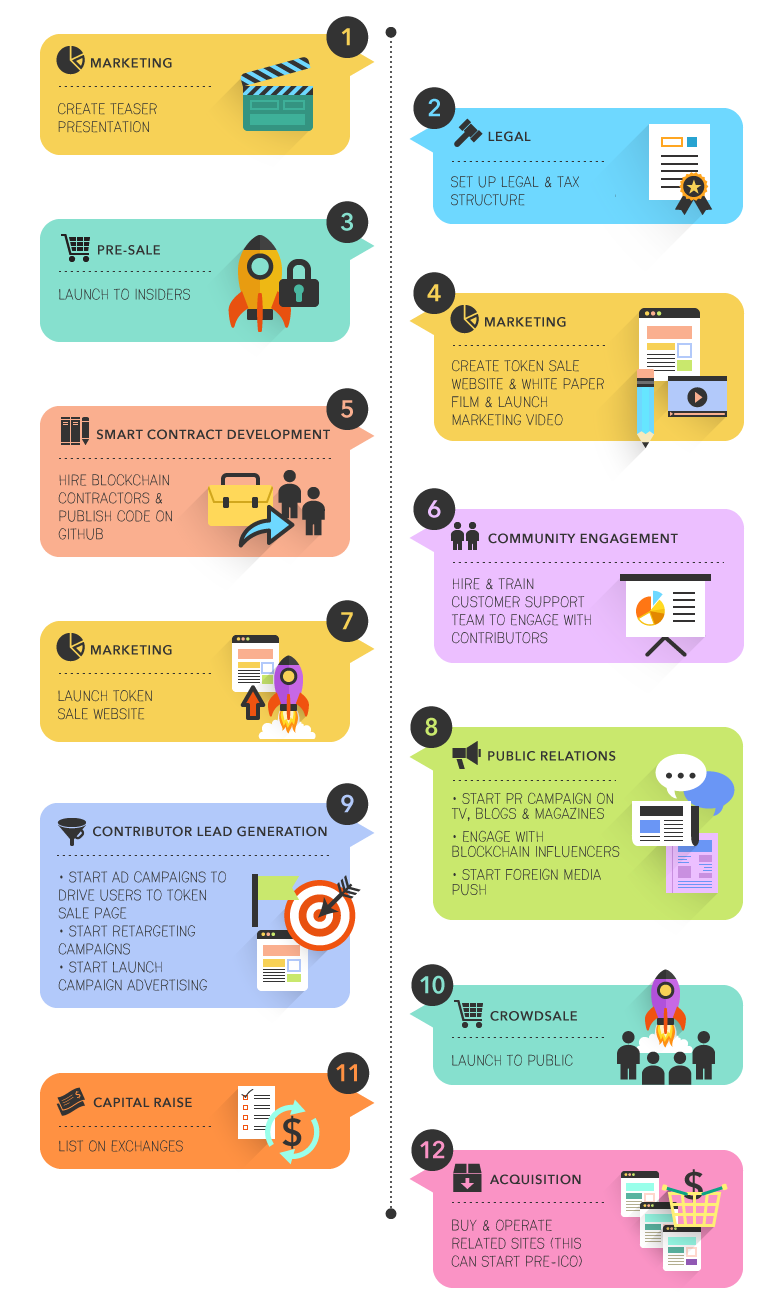 As you may or may not know from the new about page, we are running a little incubator for cryptocurrencies down here in Valle de Bravo. Here’s a look at some of the key activities our apprentices are working on:

They will also assist the CEOs of businesses we invest in to:

Successful apprentices have the opportunity to eventually become the CEO of a business as well.

If that sounds interesting to you, apply for the apprenticeship here.

ICOs are a great way for startups to raise funds through tokens. Contributors gain access to a project by sending a startup money, and get the equivalent amount of tokens in return.

This provides funds for the startup to develop the promised technology. But because there’re so many startups jumping on the ICO bandwagon, it’s hard to stand out from the crowd.

The goals of a startup doing an ICO are to:

To achieve these goals, the startup needs publicity and scale. We recommend that startups acquire related sites that complement their core product because:

Karen Foo is a deal flow expert and digital marketer with experience in a wide range of industries from finance to education. She is a National University of Singapore Business School graduate and her corporate career spans Europe and Asia. You can tweet her here (https://twitter.com/tsueyer).